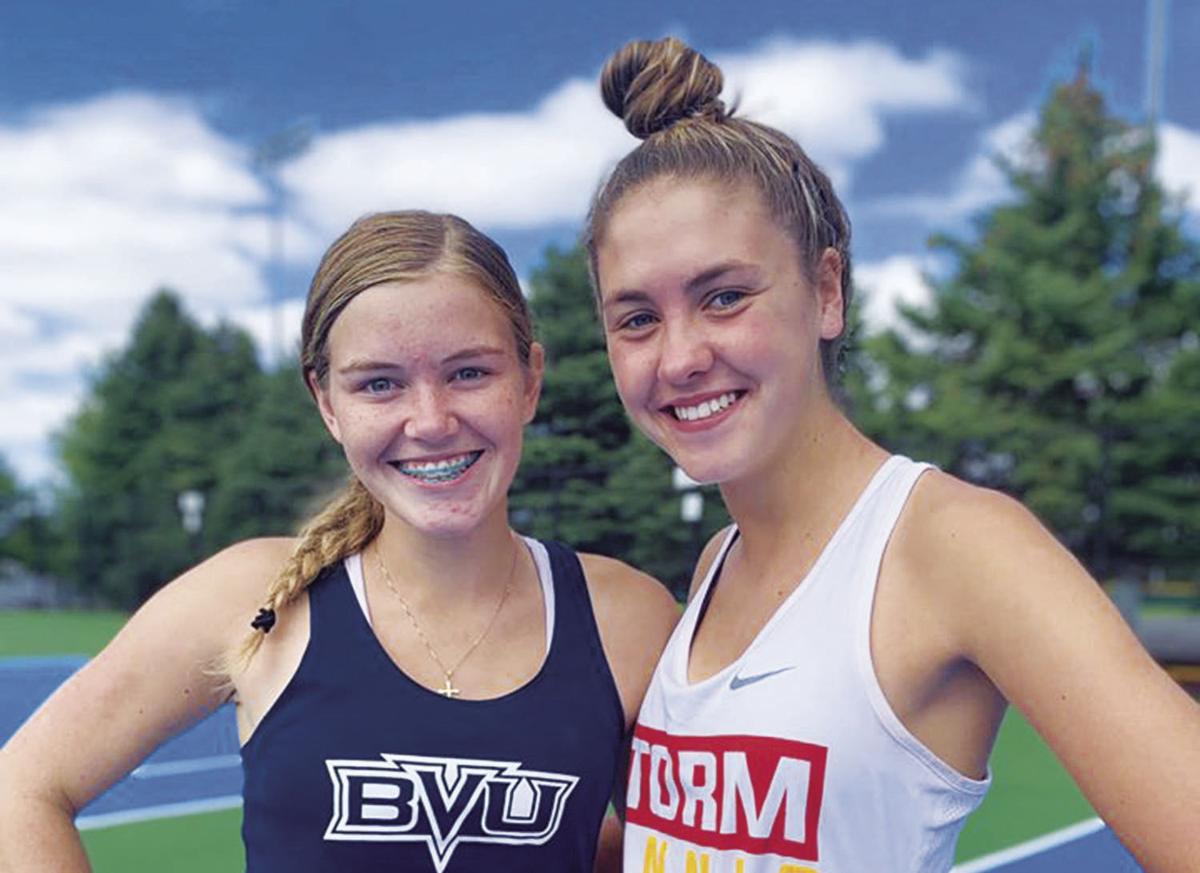 Shenandoah graduates Alexis McGinnis (left) and Donni Kinghorn (right) pose for a picture during a 2019 tennis match, which saw them representing different Iowa schools. McGinnis and Kinghorn are two of many across the country who saw their spring season canceled. 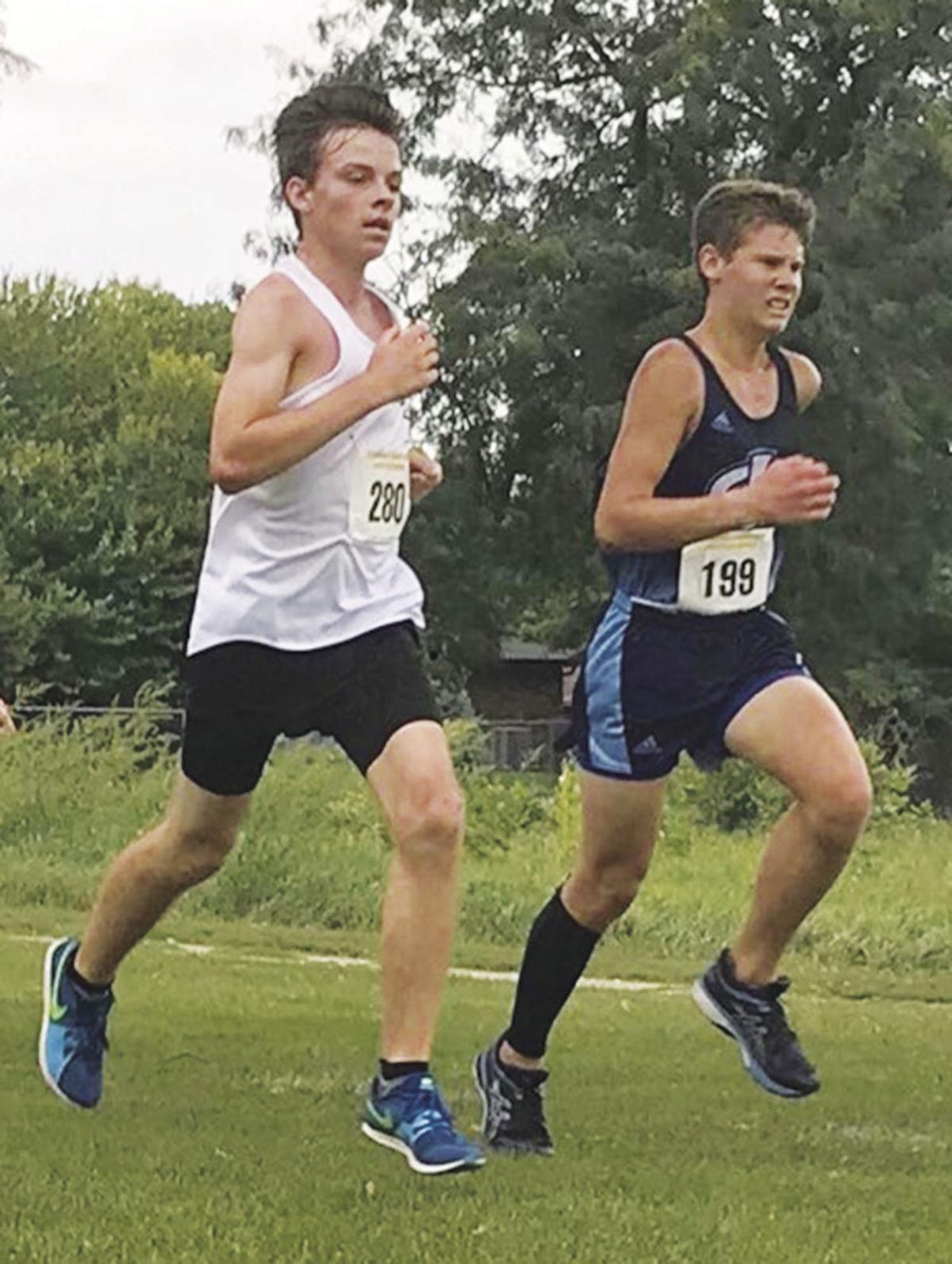 Shenandoah graduates Jack Campbell (left) and Levi Son (right) race against each other during a 2019 cross country meet while competing for different Iowa schools. Campbell and Son are two of many across the country who saw their spring season canceled.

Shenandoah graduates Alexis McGinnis (left) and Donni Kinghorn (right) pose for a picture during a 2019 tennis match, which saw them representing different Iowa schools. McGinnis and Kinghorn are two of many across the country who saw their spring season canceled.

Shenandoah graduates Jack Campbell (left) and Levi Son (right) race against each other during a 2019 cross country meet while competing for different Iowa schools. Campbell and Son are two of many across the country who saw their spring season canceled.

“It seemed like everything was normal until it wasn’t.”

That’s from 2019 Shenandoah graduate Claire Campbell, a freshman at Loras College, who like all other college athletes lost their spring sports season because of the coronavirus (COVID-19) pandemic.

Campbell and three of her Shenandoah classmates had started their first spring collegiate seasons in either track and field or tennis, but quickly lost it.

“We were all very shocked and so sad,” said Alexis McGinnis, who is Buena Vista’s number one tennis player. “We didn’t realize the last time we played would have been our last with the only senior and team.”

Another member of Shenandoah’s third-place state tennis team last year, Donni Kinghorn, is playing at Simpson and said it all ended too quickly.

“One of my friends, a freshman from Wisconsin, was planning to transfer in the fall to be closer to home,” said Kinghorn, “and we thought we had the rest of the season/semester with her before she left. After hearing the news her family drove down that day to get her for spring break. A couple days later classes were moved online so apparently that was the last time I will see one of my very, very good friends for a long time.”

Levi Son runs track and field and cross country for an Iowa Central team that won the NJCAA National Indoor meet. Son said their chance at winning an outdoor title ended before they were able to compete outside.

All four said it was a shocking end as the season had just started. McGinnis and Kinghorn had just started the spring season. Son’s outdoor season had yet to begin and Campbell was just starting to run again recovering from injury. Now they all must wait for the fall for their next competition.

College tennis season starts in the fall, takes a break for winter, and resumes in the spring. McGinnis’ Beavers had just won their first dual of the 2019-2020 season before the season ended.

“It was definitely a big change compared to high school,” said McGinnis. “I am number one on the team, so the competition was harder, but it taught me a lot and I grew from it in the end. It was very fun with my team. We all get along very well and build each other up.”

Kinghorn was excited to see what the spring season held.

“I lost my one meet of the spring in a tiebreak,” said Kinghorn, “which is very disappointing. We had some big ambitions and were playing a lot of teams we had never seen before, so we were excited for some new challenges.”

Kinghorn and McGinnis have returned to Shenandoah and said they were able to get together and play with another former Fillies tennis player in Magi Jones.

“We were sure to follow the social distancing rules,” said Kinghorn, “and remain six feet apart from each other. It was nice to get out and hit since it had been a week or two since we have been able to.”

McGinnis added she’s been doing her best to get a workout and some running in every day. Campbell is training on her own.

“I’m just trying to build up my mileage,” said Campbell, “so I am ready for summer training and next cross country season.”

Son has had some help in his training. Brother Blake is a senior member of Shenandoah’s track and field team and they have gone out together a few times. Campbell’s brother, Jack is running for Morningside and Son said they have run together some as well.

“My coach sent a workout when we went home,” said Son, “so based on those I do an easy run and then the next day a sprint workout or a long tempo run. I’m going to start early with the long miles and train for this fall and my sophomore season of cross country.”

Many colleges and universities have switched to online-only learning for the remainder of the spring and that began last week for Campbell and Son. Son said he had a head start on online classes earlier this spring.

“We started last Wednesday with our classes online with Zoom,” said Son. “I already used the format when an instructor couldn’t get to campus and teach because of an injury, so I was prepared for online classes.”

Son has missed the hands-on experience he was getting on the radio and doing some production work for the Iowa Central athletics department.

Campbell did not have a similar sneak peek to online classes and said the transition hasn’t been easy.

“Classes online are definitely different,” said Campbell, “and it takes a lot more organization to stay on top of things. Some professors are using Zoom meetings during class time to lecture and others have theirs pre-recorded. I miss the in-class experience, but I have to work with what I have and I’m thankful I don’t have to give up a semester’s worth of credits.”

Kinghorn and McGinnis hadn’t resumed classes as of late last week, but neither were looking forward to it.

“I think switching to online classes will be extremely difficult in some classes,” said Kinghorn, “and the course syllabus will have to change quite a bit.”

Overall, McGinnis wasn’t sure what to think of having all her classes take place away from campus.

“I’m not sure how it will go,” said McGinnis. “Some of my classes are going to be on Zoom, so that will be interesting.”

The transition has been tough for these college students, who were just starting to get back into routine for their second semester of college. They are now back home having to do something that few students have much experience with. Kinghorn shared a good perspective, though, for all of us going forward.

“It’s been a rough transition that really helped me realize how grateful I should have been for my everyday life,” said Kinghorn. “I’m really looking forward to the fall when this has hopefully all cleared up and I’m able to return to school and tennis.”