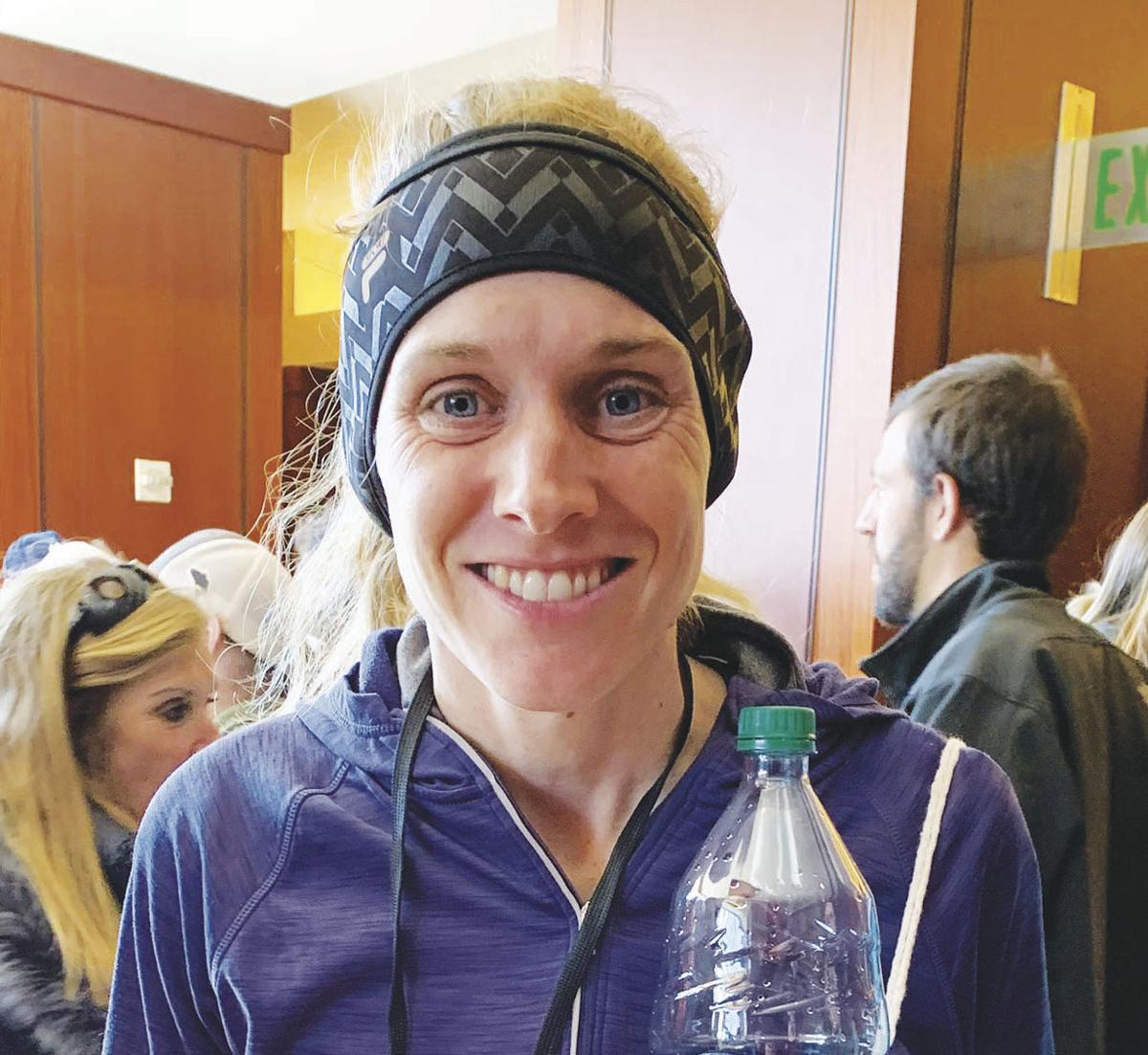 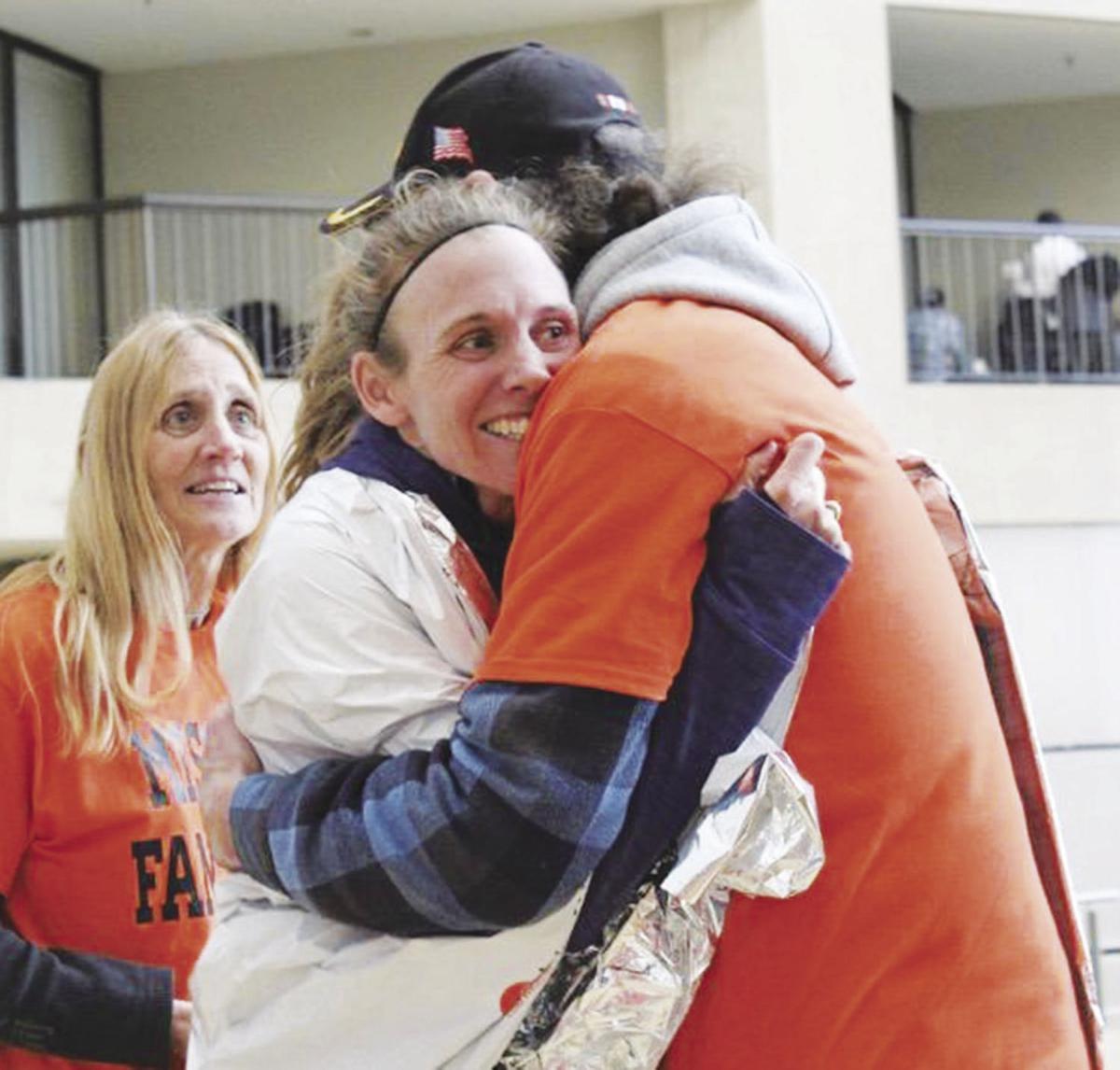 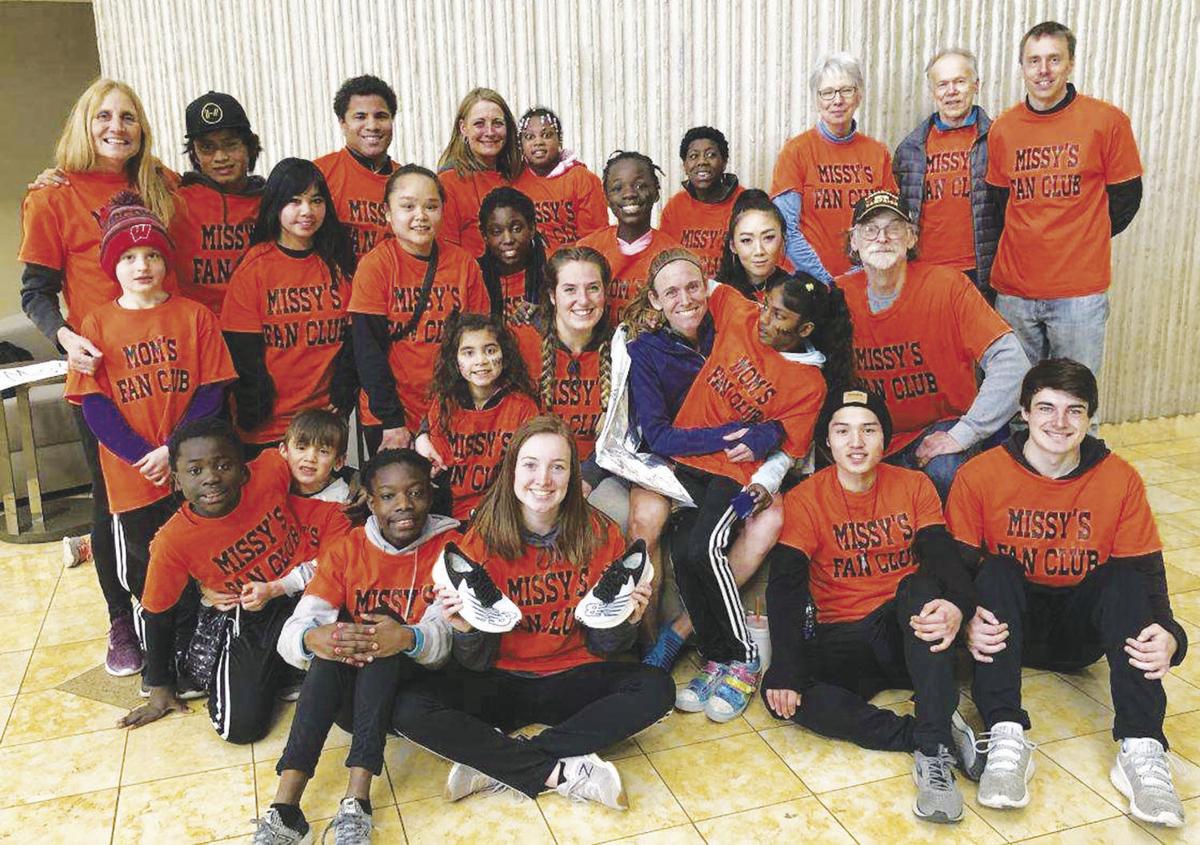 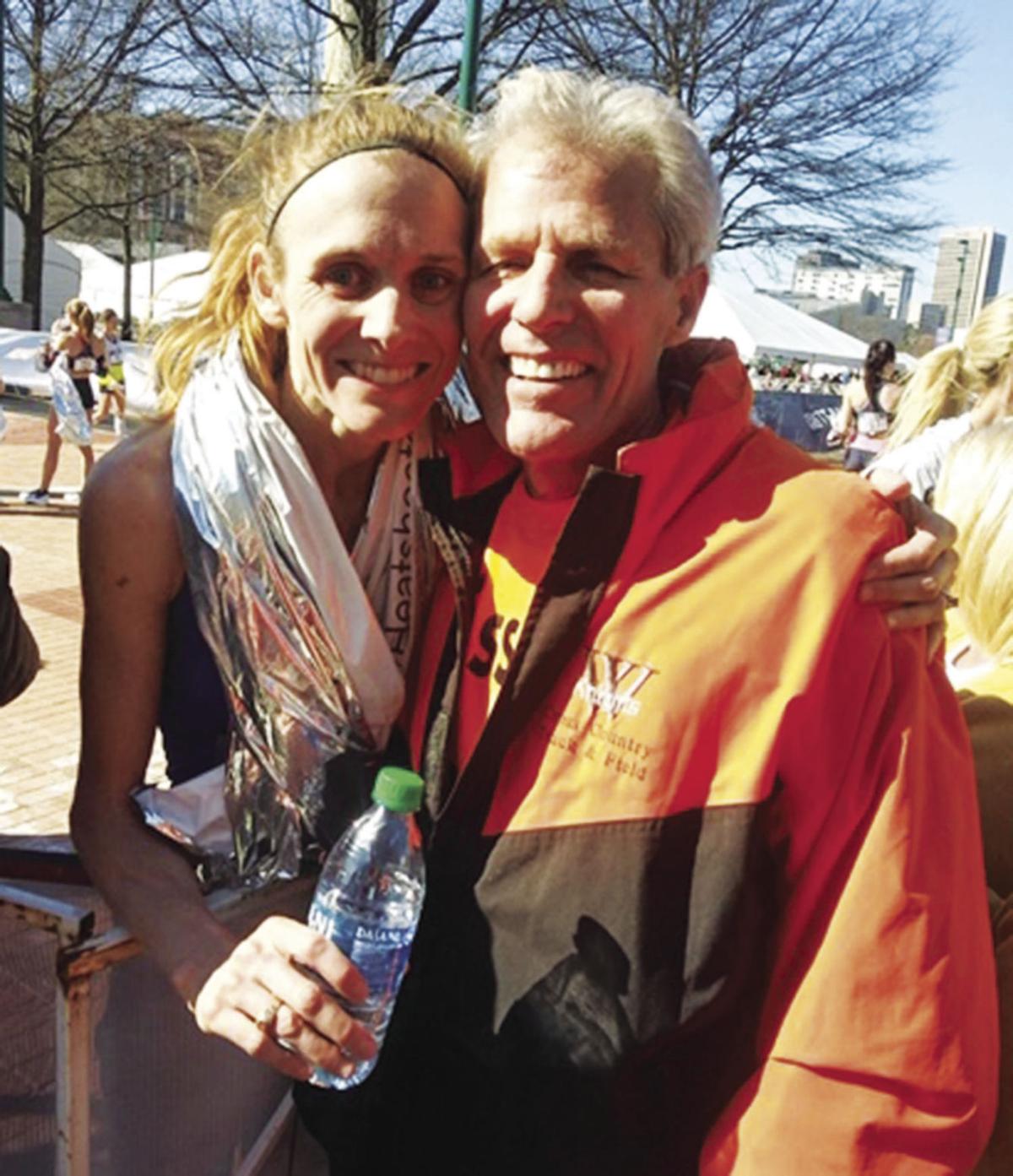 Missy (Buttry) Rock stops for a picture with retired Wartburg coach Steve Johnson after running in the marathon at the U.S. Olympic Team Trials.

Missy (Buttry) Rock stops for a picture with retired Wartburg coach Steve Johnson after running in the marathon at the U.S. Olympic Team Trials.

Rock finished the 26.2 mile course in 2 hours, 39 minutes and 12 seconds, an improvement of nearly two minutes from her qualifying run at the Chicago Marathon in October. Her time was 37th-fastest out of 390 women that finished the race. The top three qualified for this summer’s Tokyo Olympics.

Rock is the daughter of Don and Pam Buttry of Shenandoah. She won a state cross country title for Shenandoah in 1998 and then went to Wartburg College where she won three national cross country championships and 11 national track and field titles before earning her degree in 2005.

She was coached at Wartburg by Steve Johnson, who coached her again to her qualifying run at Chicago and at the Trials. Rock said they made a goal going into Saturday’s race of placing in the top 50.

“And see how far up we could get from there,” Rock said about the goal. “I came in ranked 160-something time-wise and thought if we could beat 100 or more people that had faster times that would be a success.”

The race was shown live on NBC and the race commentators mentioned multiple times that it was a cold, windy day on a hilly course. Rock agreed with that, for the most part.

“It was constant up and down hills,” said Rock. “There really wasn’t any flat part. The weather was nice temperature-wise, but there was a 16 to 20 mile per hour wind, which added a new challenge to it.”

The race started and finished in Atlanta’s Centennial Park and was mostly run in three eight-mile loops. Rock said the game plan was a conservative start and it worked quite well.

“Coach said to take the first lap not aggressive at all,” said Rock, “to go out pretty slow and get a feel for the course. He said a lot of the girls will get out too aggressively and pay the price on those hills later.”

She said it was tough being passed as much as she was on the first lap, but she felt good to start lap two and went after it.

“I got through the first loop and picked it up on the second and started passing people,” said Rock. “That was a lot more encouraging. I got into a good rhythm and a good pace.”

She said things were going well, but with six to eight miles to go the fatigue from the hilly miles started to set in. She had a few Bible verses memorized she kept reciting to herself to help her on the course. She also knew she wasn’t the only one hurting at that point and focused on staying mentally tough.

“The last couple miles were really hard, but it was just about getting to the finish line at that point,” said Rock. “I ended up two minutes faster than I had coming in. To run a (personal record) on a very challenging course gave me a lot of confidence that my fitness was in a much better spot than when I qualified.”

Rock, her husband Andrew and their four children, live in Prior Lake, Minnesota. She is a stay-at-home mom and assistant coach for the Bethel University cross country team. She said a mild winter and her family staying away from illness were huge blessings in being able to train as hard as she did, and that training was huge in her crossing the the finish line.

She had surgery in December 2018 to correct Haglund’s Deformity in her ankle and said training for Chicago was based on staying healthy, but for the trials they pushed it a little more.

“The goal was still to get to the starting line healthy, so we didn’t push it too much,” Rock said of the last few months, “but I was running 60 to 65 miles (per week) before Chicago, and went mainly 70 to 75 going into the trials. I would do that for three weeks and then coach brought me down for a week, so my body could absorb the work.”

That was the cycle during December, January and into the first part of February as she missed just three days of training. There were a lot of mile repeats, three-mile repeats and tempo runs and her speed and strength continued to increase.

“A lot of things lined up,” said Rock. “I handled the mileage really well and felt great within the mileage. The workouts kept getting a little faster and better and that gave me a lot of confidence.”

Her confidence brought her to the finish line where she was able to see her husband, parents and coach almost immediately.

“They allowed three family and friends bands (into the finish line area),” said Rock, “so my husband and parents had those and my coach had his coaching credentials. They were all so thrilled and excited because I had run a (personal record) on a challenging course and had beaten a majority of women who had gone in faster than me. All the hard work had paid off and God had blessed me through the training and the race.”

A little later she was able to meet the rest of the family and had to share a story about one of her kids.

“My 9-year old son had written me a letter that morning,” said Rock, “wishing me good luck and telling me he knew I had worked hard and to give God the glory. Then with a mile left he and my dad were running along a sidewalk cheering me on knowing that it was tough at that point and I could hear (my son) say “you’re running perfectly mom, keep going.”

Rock is very appreciative of all the support she has received on this journey and that starts at home.

“My kids and husband have been on this journey with me and have seen the day in and day out,” said Rock, “and they have been such troopers through it all. To have them on the course and see them at the finish line was really special.”

She added it was also quite special to have her parents and siblings there. Liz and Jon Skillern, who both teach and coach at Shenandoah, made the trip as well.

“That’s a big trip for (the Skillerns) to make,” said Rock. “There have been so many old teammates from high school to college, old coaches and people in the community reaching out and wishing me luck, saying they were praying for me and cheering for me. The community’s belief in me and my abilities and talents means a lot.”

Coming off a successful run at the trials, an obvious question is what’s next for Rock’s running career. She said those answers will come soon, but she’s not done yet.

“I’m finally healthy and am really enjoying it,” said Rock, “so I want to see where I can get back to. Some of the workouts I was doing were indicating I was in as good a shape, if not a little better, than some of my college days and that’s very exciting, especially in the stage of life that I’m in.”

She is considering stepping back on the track and trying to qualify for this summer’s Olympic Trials in the 10,000 meter run. She adds “there will definitely be another marathon.”

“I’m at a new part of my career and kind of restarting it,” said Rock. “I’m excited. There are a lot of women running into their 40s now at a high level and that gives me hope and inspiration that I can continue on, see my times drop a little more and push myself in different ways.”

Rock and Johnson will get together at the end of this week to re-evaluate goals and figure out the next step in Rock’s running career.